DNS Belgium, who run .be as well as .brussels and .vlaanderen, have been running a "Registrar Forum" for the last few years. The forum has 15 members drawn from DNS Belgium's management and the registrars.Due to one of the member's terms expiring there is now an opening on the forum.If you're a .be registrar then you can apply to join.Full information is available … END_OF_DOCUMENT_TOKEN_TO_BE_REPLACED 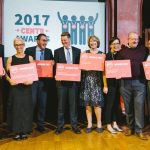 The ccNSO which represents country code domain registries within ICANN such as .fr, .uk and many others is furious with ICANN's NomCom.In a letter dated September 29th 2017 the ccNSO outlines the issues they have. They're pretty clear.The Nomcom has chosen to appoint someone to the ccNSO council whose profile is at odds with the CCNSO council's selection criteria. … END_OF_DOCUMENT_TOKEN_TO_BE_REPLACED