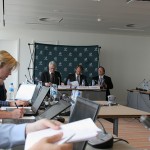 In a press release yesterday ICANN has stated that they will publish the list of applicants for new TLDs on April 30th. Previously many had spoken of a "big reveal" on May 1st, though that would have coincided with a public holiday in many countries and might have been "missed". However ICANN CEO, Rod Beckstrom, claims that the organisation had always planned to publish … END_OF_DOCUMENT_TOKEN_TO_BE_REPLACED