ARIN is running a trial service that gives users access to historical IP whois data ie. it will tell you who was responsible for an IP address or block of IPs.The service is not automated and if you want to access it you will need to submit a request via email with information about not only what you want to know, but why you are interested in accessing the … END_OF_DOCUMENT_TOKEN_TO_BE_REPLACED 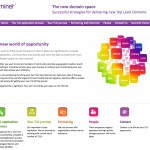 Well I guess it wasn't really a secret that Nominet was going to be offering gTLD registry services..However the new registry services site makes it very clear that they are "open for business"So far there have been rumours about Nominet's involvement in a number of UK based applications including .london and a .wales, though apart from .wales nothing has been … END_OF_DOCUMENT_TOKEN_TO_BE_REPLACED

ICM Registry are getting a lot of attention in the media at present, though most of it probably isn't that welcome. With both ICM and ICANN being named in a law suit tensions are probably running high..However ICM are a business and they're currently trying to make their launch as successful as possible.Enter their new billboard image that is currently gracing Sunset … END_OF_DOCUMENT_TOKEN_TO_BE_REPLACED

Centralnic, the company that runs .uk.com and other extensions, is now an ICANN accredited registrar.They don't appear to be listed on the IANA site yet or on the ICANN list of accredited registrars, however ICANN has informed registry operators of the accreditation, so expect their name to appear there soon. Related articlesSo Centralnic Acquired Gb.com … END_OF_DOCUMENT_TOKEN_TO_BE_REPLACED

As part of its ongoing review of domain transfers ICANN has opened a public comment period.You can read the full announcement here.This time round the focus is on:"change of control" ie. when a domain changes registrant / holder with OR without a change of registrar Timing out / expiring transfer authorisations. At the moment it's a bit "up in the air", so it … END_OF_DOCUMENT_TOKEN_TO_BE_REPLACED

GMO Registry, the people who are behind the very visible bid for .shop,  announced their intention to tender for the .tokyo contract back in June of this year.It looks like their bid will be successful as they've now got the backing of the local government Related articlesGMO Registry Announces Application for DotShop New gTLD (prweb.com) GMO Registry to Partner … END_OF_DOCUMENT_TOKEN_TO_BE_REPLACED

Eurid, the registry for .eu domain names, is running a competition from the end of November until Christmas day.Anyone who registers a .eu domain name between November 24th and December 25th will be entered into a draw to win an iPad 2. Draws are being held on 2, 9, 16 and 27 December 2011 with two iPads up for grabs during each draw.(And of course Blacknight is … END_OF_DOCUMENT_TOKEN_TO_BE_REPLACED

In a move that shouldn't come as a surprise to anyone, the EU Commission has given a rather mixed welcome to the IANA bid. While they obviously like a lot of what they are seeing, they're also not overly impressed with the contract only being open to US companies.Here's the full text of their press release: Digital Agenda: Commission welcomes improvements in new IANA … END_OF_DOCUMENT_TOKEN_TO_BE_REPLACED

Eurid has announced that French registrar MailClub is to join the Eurid Registrar Advisory Board.Two of the other members of the board have been re-appointed for a second term.The board's composition is, therefore, as follows:Dimitris Anthoulakis, Usableweb Ltd (Greece) Markus Eggensperger, United Domains AG (Germany), reappointed for a second term Adam Eisner, … END_OF_DOCUMENT_TOKEN_TO_BE_REPLACED

Switch, the .ch registry, and several other organisations are organising an event in Berne, Switzerland on new TLDs.The event siteincludes basic information about the day, but is lacking information on speakers ..Registration is free Related articlesNew TLD Event To Be Held In Bulgaria (internetnews.me) 4th International conference for ccTLD registries … END_OF_DOCUMENT_TOKEN_TO_BE_REPLACED