The APWG is meeting this week in Barcelona. The event, which is being attended by security professionals, researchers, law enforcement and others will be hearing this afternoon about the APWG's Global Phishing Survey for the second half of 2014. The report (PDF) was produced by Greg Aaron and Rod Rasmussen is well worth reading if you want to get an idea of some of the … END_OF_DOCUMENT_TOKEN_TO_BE_REPLACED 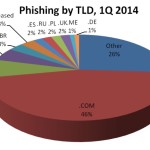 The APWG (Anti-Phishing Working Group) has released their report for Q4 of 2014. It makes for fairly depressing ready, as you'd expect, but it's worth taking the time to have a look over it. So which TLDs are most (ab)used in phishing and malware attacks? It's hardly surprising that .com is the most (ab)used (46%) - it's also the most popular domain extension. What is a … END_OF_DOCUMENT_TOKEN_TO_BE_REPLACED