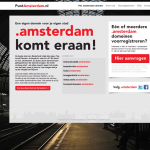 SIDN, the organisation that runs .nl, has been awarded the contract to provide registry backend services for .amsterdam. The company that will be running the .amsterdam registry has already launched a public site where they're accepting pre-registrations. While I'd normally question anyone offering pre-registrations at this stage a .city TLD is a lot less likely to run into … END_OF_DOCUMENT_TOKEN_TO_BE_REPLACED