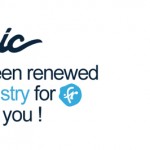 Due to a rather odd Gallic twist AFNIC was forced to bid on the .fr registry contract again. They announced on Thursday that the French government had awarded the contract to them (again) for a 5 year period: In an Order published in the Official Journal of the French Republic on 28 June 2012, Ms Fleur Pellerin, Junior Minister for the Digital Economy, appointed Afnic as … END_OF_DOCUMENT_TOKEN_TO_BE_REPLACED