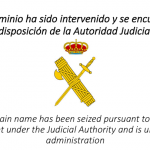 Websites associated with the upcoming referendum in Catalonia are being blocked by ISPs in Spain.While several of the domain names used by advocates of the Catalan referendum have been seized by authorities others are being blocked by the ISPs in Spain. For those of us outside Spain the blocking has zero impact on us, so we can see the sites without any issue, but for users … END_OF_DOCUMENT_TOKEN_TO_BE_REPLACED

The offices of the .cat registry were raided by Spanish police this morning.The Guardia Civil officers entered the .cat registry's offices around 9am local time this morning and have seized all computers in the domain registry's offices in downtown Barcelona.The move comes a couple of days after a Spanish court ordered the domain registry to take down all .cat domain … END_OF_DOCUMENT_TOKEN_TO_BE_REPLACED