Amazon Registry is hiring for their legal department. The job title? Corporate Counsel, IP. While the focus is intellectual property it's firmly focussed on domains: We are looking for a talented attorney to support our intellectual property efforts in our rapidly growing and evolving company. Counsel will support the Amazon Registry Services business on a broad range of … END_OF_DOCUMENT_TOKEN_TO_BE_REPLACED 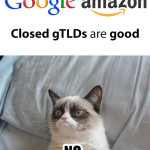 Over the last few months one of the areas of attention in the new TLD project has been "closed generics". I've written about this several times in the past and I've also raised the issue in as many fora as possible. Yesterday ICANN published a letter they'd received from Google with respect to several of their new TLD applications. Whereas Google had made it clear … END_OF_DOCUMENT_TOKEN_TO_BE_REPLACED

The debate surrounding "closed generics", which we've covered several times in the past, has attracted a lot of attention in recent weeks. At the centre of the debate were a number of new TLD applications from large companies including Google, Amazon and others. Google had stated that they planned to establish a number of domain extensions and operate them as "walled … END_OF_DOCUMENT_TOKEN_TO_BE_REPLACED

Some pretty big companies are beginning to show an active interest in ICANN's new TLD project. The most recent of them is bookseller Barnes & Noble. The letter, which is available both on the ICANN website and below, is quite narrow and pointed in its scope and focusses on the perceived competition issues with Amazon's bids for several "closed … END_OF_DOCUMENT_TOKEN_TO_BE_REPLACED

I'm on the record multiple times over the last few months for my opinions on "closed generics". I first posted about it here back in June of last year: Big Brands Trying To Corner Generic Namespaces? Since then I've sent several letters to ICANN (supported by many others) and have been quoted and referenced in several articles on the subject including Politico.com: … END_OF_DOCUMENT_TOKEN_TO_BE_REPLACED

Trying to make sense of the nearly 2000 new TLD applications is not something that anyone can do quickly. Sure, you can look at the list and see who has applied for what, but it's only when you actually read the "public" part of their submission that you can get an insight into their plans. Let's call a spade a spade. If a big brand wants to get its own TLD then it's pretty … END_OF_DOCUMENT_TOKEN_TO_BE_REPLACED