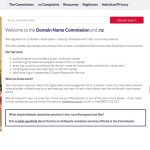 The .nz ccTLD's policies are managed by the Domain Name Commission, who I've mentioned previously. They're currently conducting an open consultation on dispute resolution in the .nz name space. The consultation is made up of both online and offline options, so that stakeholders get plenty of opportunity to provide input. You can read about the current policy and process … END_OF_DOCUMENT_TOKEN_TO_BE_REPLACED

AFNIC's new dispute resolution system, Syreli,  is now live with one decision published so far. The first case involved infragenius.fr The case was processed fully in less than a month, with the initial complaint being logged on November 22nd 2011 and the decision being handed down on December 19th 2011. The first case was pretty simple and wasn't that contentious with … END_OF_DOCUMENT_TOKEN_TO_BE_REPLACED