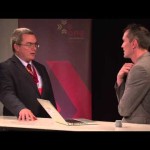 Paul Vixie recently gave a presentation at a security conference in the Netherlands entitled "Defective by Design -- How the Internet's Openness is Slowly Poisoning Us " It's a provocative title for a talk and this interview he gave at the conference is well worth watching. Watch it and make up your own mind: http://youtu.be/J0YxPqdFtZ4 Related articles ISC … END_OF_DOCUMENT_TOKEN_TO_BE_REPLACED 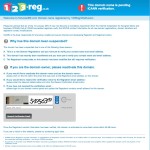 Under the terms of the 2013 Registrar Accreditation Agreement registrars are obliged to conduct email verification both on new domain registrations and if there are any changes made to a domain's registration details. For those of us in the industry we suspected and feared that the changes could and would lead to issues and headaches. And it looks like it's already happened … END_OF_DOCUMENT_TOKEN_TO_BE_REPLACED 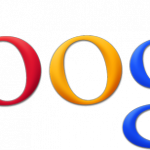 IEDR issued a statement yesterday in relation to the hijacking of google.ie and yahoo.ie The statement (IEDR_Statement_F_issued_9_November_2012) which is included below admits that their site was compromised and that the registrar was not to blame. IEDR has concluded an investigation by the company and external security consultants of an unauthorised intrusion into the … END_OF_DOCUMENT_TOKEN_TO_BE_REPLACED 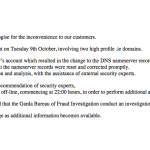 The IEDR websites are currently unavailable. However this time there is a holding page which carries a simple explanatory message: IEDR systems are currently unavailable. We apologise for the inconvenience to our customers. As you may be aware, there was a security incident on Tuesday 9th October, involving two high profile .ie domains. There was an unauthorised … END_OF_DOCUMENT_TOKEN_TO_BE_REPLACED

Image via Wikipedia Dan Kaminsky's discovery of a nasty bug in DNS rocked the security world in 2008. It's now 2010, so you would be forgiven for thinking that most DNS servers should have been updated, patched or configured in such a manner as to render the Kaminsky hole null and void. Unfortunately that is not the case. Several medium sized DNS providers, … END_OF_DOCUMENT_TOKEN_TO_BE_REPLACED