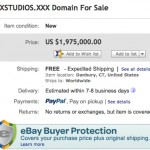 From the "told you so" and "some domainers are really really dumb" department ..Yes - foxstudios.xxx and asking a crazy high price for itAs Kevin reports Fox have now filed a UDRP.Prediction - unless Fox's complaint is submitted on toilet paper this will be a slam dunk win for them.Tip: Do not register domain names that are an exact or close match to well known … END_OF_DOCUMENT_TOKEN_TO_BE_REPLACED

Why did this case catch my eye? Well when the respondent tells WIPO that the domain is "available to lease" it's going to catch my attentionWIPO have awarded John Wiley & Sons the domain webhostingfordummies.com following a UDRP dispute.What surprised and amused me was the reply the registrant sent WIPO on being notified of the dispute: The Respondent did not reply … END_OF_DOCUMENT_TOKEN_TO_BE_REPLACED

Normally in the weeks prior to an ICANN public meeting there is a buzz of activity as documents need to be submitted to meet the deadlines before the public meeting. While this has happened as usual and the deadline is still open until Tuesday for the GNSO council meeting on 22nd June, there are currently only 6 comment periods open.Whether or not … END_OF_DOCUMENT_TOKEN_TO_BE_REPLACED

Image via WikipediaRemember the draft IRT report? Well they've published the final version after supposedly taking into consideration comments and feedback. However you'd be forgiven for thinking that their view on the feedback process was ever so slightly biased. Basically they seem to have taken on board any comments and feedback that supported their views and either ignored … END_OF_DOCUMENT_TOKEN_TO_BE_REPLACED

One of the WIPO decisions published today relates to gillette.ro. The registrant (respondent) didn't make any submissions in their defence, so the decision could have been quite banal. However some of the panelist's comments under the "Registered and Used in Bad Faith" section are quite interesting under:The Panel disagrees with the Complainant's submission that the only … END_OF_DOCUMENT_TOKEN_TO_BE_REPLACED

While the number of WIPO UDRP cases involving IE domains is not that big, there are still more than enough to show that trademark holders should pay attention to the IE namespace.The most recent decision involved the domain "fatboy.ie".If you are familiar with them Fatboys are a sort of beanbag. (You can find out more about them here)In this case the domain fatboy.ie was being … END_OF_DOCUMENT_TOKEN_TO_BE_REPLACED

WIPO, which manages domain disputes on behalf of the gTLDs and a lot of the ccTLDs, has put forward a proposal to ICANN for a paperless UDRP process.In a very interesting and insightful article on CircleID George Kirikos looks at the implications of such a process. If you have an interest in domains then you really should read both what he has to say and the details of the … END_OF_DOCUMENT_TOKEN_TO_BE_REPLACED

Image via Wikipedia Good quality watches are not cheap and the companies that make them have a constant battle against fraudsters of all kinds. People typo squatting their name obviously doesn't help.Breitling is a very well known brand of watch. They own breitling.com.Someone else owns bretling.com. Notice the difference? There's only one letter in it and someone typing … END_OF_DOCUMENT_TOKEN_TO_BE_REPLACED

Image via WikipediaI keep a close eye on the WIPO UDRP decisions, as sometimes they can be very interesting.In most cases decisions are either upheld or denied and when they are upheld the normal followup would be for the domain in question to be transferred to the IP holder.However WIPO's latest set of UDRP decisions shows a different line of thought entirely.In several cases … END_OF_DOCUMENT_TOKEN_TO_BE_REPLACED