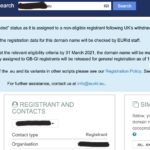 Back in October of last year I noted that one of the Brexit campaign's more visible groups had switched their leave.eu domain name over to an Irish entity. Under the .eu registration rules the registered holder of a .eu domain name has to be within the European Union or, in the case of private citizens, a citizen of a member state. Switching a domain name over to an entity in a … END_OF_DOCUMENT_TOKEN_TO_BE_REPLACED

It's looking less and less likely that there will be any big "in person"" events in 2021 with more and more event organisers announcing their plans to hold their events online.ICANN has announced that ICANN 70 which was meant to be held in Cancún, Mexico is being held online, though it will be scheduled on the Mexican city's timezone.You can register for the event … END_OF_DOCUMENT_TOKEN_TO_BE_REPLACED 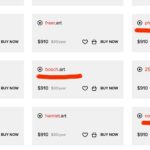 When new TLDs were being introduced one of the arguments in their favour is that they'd offer more choices to registrants.Earlier today the .art registry made a rather odd announcement:https://twitter.com/Art_Domains/status/1346502397644972039Apparently they're now offering "3rd level domains"What now?According to the blog post:ART’s third-level domains … END_OF_DOCUMENT_TOKEN_TO_BE_REPLACED